Pièce 13 - 'Documents presented to the U.S. Government on behalf of the Irish Republic'. 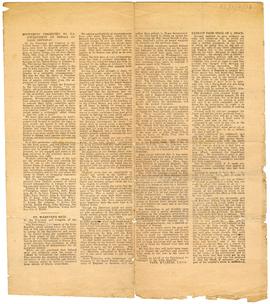 'Documents presented to the U.S. Government on behalf of the Irish Republic'.

Fragile single-sided printed page, possibly from a newspaper or pamphlet. Document details the declaration presented to the USA Government on behalf of the Irish Republic by Dr Patrick McCartan in July 1917. Includes the complete declaration signed by Irish nationalist leaders such as 'Edward de Valera' [sic], Eóin MacNéill and 'Des Fitzgerald', and a 'note' by McCartan addressed to the President and Congress of the United States. Also includes an '[e]xtract from the trial of A. Stack' [?Austin Stack].

McCartan would go on to serve as the Irish Provisional Government envoy to the USA, 1918-1920. Charles Tansill writes in America and the Fight for Irish Freedom 1866-1922: An Old Story Based Upon New Data (New York: Devin-Adair Company, 1957) that the signatories of the declaration had been released from prison (following their part in the Easter Rising) on 18 June 1917 as a gesture of good will to American public opinion. Tansill notes that the statement was written by MacNéill upon their release and taken by Patrick McCartan to the USA, where it was presented at the White House on 23 July 1917.

This item is fragile. It should only be handled if completely necessary. To avoid unnecessary handling, it has been digitised and a high-resolution image is available in the reading room for consultation. Please consult with the archivist for access.