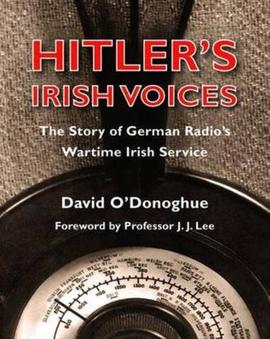 Dr David O'Donoghue is an Irish journalist and historian who has written two books on Irish-German relations during the Second World War.

Hitler's Irish Voices is an audio documentary, created and produced by Dr. David O'Donoghue. It was first broadcast on Radio Kerry on 26 October 1998 and includes interviews about the pro-German propaganda radio service, Irland Redaktion, which broadcast from Germany during the Second World War, from 10 December 1939 until 2 May 1945. This documentary includes recordings of interviews with Francis Stuart, Hans Hartmann, Elizabeth Clissman, Hugh Byrne, Seán Ó hEochaidh, Maurice Irvine, and Ludwig Mühlhausen.

28:45-30:36 Francis Stuart talks about Dr Hans Hartmann sacking him from the Irland Redaktion in January 1944, because he refused to do anti-Russian talks.

Production information
David O'Donoghue is the creator, scriptwriter and narrator of this audio documentary. Fred Meijer was technical director.

Hitler's Irish Voices is under copyright by creator and depositor, Dr. David O'Donoghue, 1998, and is licensed under a Creative Commons Attribution 4.0 International (CC BY 4.0). Creative Commons is a licensing system which allows content creators to assign a licence to their work rather than reserve their full rights under Copyright law.

Dr. David O'Donoghue's thesis examines the origins, direction and control of German Radio's Irish propaganda unit in World War II. Known as the Irland- Redaktion, this unit was founded by a small group of Germans, some of whom had studied Irish folklore and language in the Gaeltacht regions in the 1920s and 1930s. Drawing widely on archival sources in Belgium, Britain, Germany, Ireland and the United States - as well as incorporating interviews with key survivors of the Irland-Redaktion - the thesis attempts to define the structures, modus operandi and raison d'être of the radio service. A detailed analysis, quoting numerous published and unpublished sources, seeks to place the output of the Irland-Redaktion in context by evaluating its structures and content, personnel and target audiences, in addition to its guiding themes and ascertainable effects. The work endeavours to explore those features of the Irland-Redaktion which, it can be argued, set it apart from other propaganda services of Germany's wartime Europasender. These include the fact that overall control of the service from November 1941 to May 1945 rested with a member of the Irish civil service who had left Dublin for Berlin shortly before the outbreak of war. The thesis also examines the special position of Ireland as a target for both English-language and Irish-language radio propaganda from Nazi Germany. While German Radio beamed programmes in 3 0 languages to other states and regions in Europe, Ireland's case was unusual. The newly independent state straddled the Atlantic shipping lanes and shared a disputed land frontier with the United Kingdom which was at war with Germany. The thesis seeks to place these and other factors in their proper context in relation to the radio service. Finally, having dealt with the pre-war and war periods, the thesis describes the subsequent circumstances of those most directly involved in the operation of the Irland-Redaktion, through the immediate post-war years to the present day.